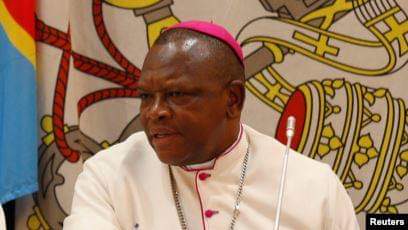 Cardinal Fridolin Ambongo, metropolitan archbishop of the Roman Catholic Church in Kinshasa, has proposed several solutions to the way out of the insecure crisis in the eastern part of the DRC. These are economic and humanitarian, diplomatic and military solutions. This was during a press briefing held this Friday, January 3 in Kinshasa after his 4-day pastoral visit to Beni-Butembo.

On the diplomatic front, Cardinal Fridolin Ambongo recommends that the DRC government activate its diplomatic arsenal to convince all neighbouring countries, including Rwanda, Uganda and Burundi, to stop dumping their peoples on the ground Congolese, a situation that he says blurs the course.

"It is crucial to distinguish between the Rwandophones, the peoples from Rwanda who have lived in Congo for years and who have become Congolese. Today, no one can challenge their nationality. These are not a problem because they are considered Congolese. Those who are a problem are the spilling of others who are coming and we are trying to make them pass like the Congolese," decries the cardinal while criticizing the process whereby Rwandan emigrants who were driven out of Tanzania and dumped in the DRC .

"It is remarkable when you talk to the military that our army is undercover. This creates a climate of mistrust on the part of the population towards the army. There is the ambiguity of MONUSCO. The people do not trust MONUSCO at all for the simple reason, next to the MONUSCO facilities, people are being slaughtered. However, MONUSCO's main mission is to protect the civilian population. There is a negative public perception in the head of MONUSCO," adds the cardinal.

In the economic and humanitarian aspect, Cardinal Fridolin Ambongo appealed to the central government and the international community to assist the people of the east who live in a precarious situation that does not say its word.

"The situation of the population is dramatic. Because of the insecurity, the population was able to abandon villages, its houses, its fields, its plantations. How will this population live when it can no longer go about its business. It's misery! regrets the cardinal.

For Cardinal Fridolin Ambongo, the situation in eastern DRC is a plan to Balkanize the country. According to an open letter addressed to the Head of State by the New Congolese Civil Society/Coordination of the cities of Beni and Butembo and the territories of Beni and Lubero on Thursday, January 02, more than 2,800 people have been killed by ADF rebels since 2014.